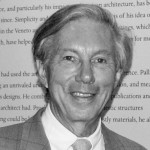 For this Classical Comments piece we will deal with some architectural minutiae—the transition from Roman-style moldings to Greek ones that took place in the late 18th century. Until the publication in 1762 of the first volume of James Stuart and Nicholas Revett’s The Antiquities of Athens virtually all 18th-century molding profiles in both Britain and America adhered strictly to ancient Roman versions as depicted in the Renaissance treatises of Palladio, Vignola, Scamozzi and others. For their sources these architects measured and published the examples close at hand, which were in abundance in the Roman ruins around them. High-style Greek ruins were all but inaccessible for study, Greece having succumbed to unwelcoming Ottoman rule with the fall of Constantinople in 1453.

Using Palladio’s Four Books as a primary source, 18th-century British treatise and pattern book authors maintained the authority of Roman moldings except for their rare indulgences in Gothic and Chinese-style designs. Palladio’s plate of different versions of the Tuscan order clearly demonstrates his observation that Roman moldings were simple segments of circles, each curve having a single center point and a single radius. (Figure 1)

In Rules for Drawing the Several Parts of Architecture, a standard textbook for the Anglo-Palladian movement, James Gibbs presented a diagram defining the moldings appropriate for each of the five orders. Shown with a dotted line, his single radius for each segment is consistent with Palladio’s interpretation of Roman moldings as basic segments of circles. (Figure 2) 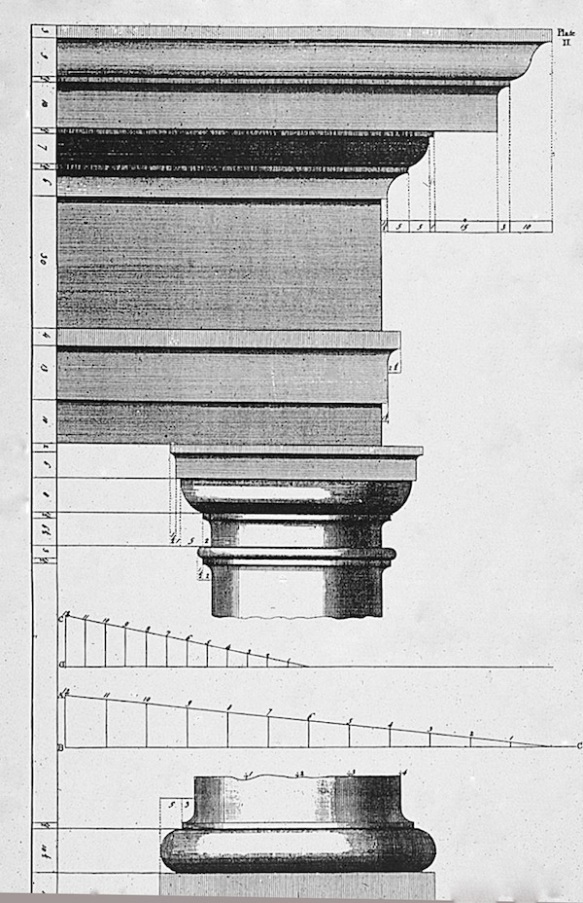 As with Palladio’s Tuscan, Abraham Swan’s plate of the Tuscan order reveals the straightforward character of typical Roman moldings. (Figure 3) Beginning with the cyma recta in the crown molding, each curve of the S-shaped molding has only a single radius. This pattern is followed in the bed moldings, consisting of the convex quarter-round ovolo and below it the concave, quarter-round cavetto. In the capital, the echinus takes on a quarter-round contour, and the astragal has a half-round profile. Likewise, in the base, the torus is a bold, half-round molding, providing visual support to the weight of the columns and entablature.

A detail of the moldings on a second-floor mantel in Drayton Hall (ca. 1750) reveals how closely its joiner adhered to the accepted rules for classical profiles. (Figure 4) Among the architectural books in John Drayton’s library, for whom Drayton Hall was built, were the Isaac Ware edition of Palladio’s The Four Books on Architecture (1738), William Salmon’s Palladio Londinensis (2nd edition, 1738), and Batty Langley’s The London Prices of Bricklayers Materials and Works (1749).[1] We can compare the mantel’s moldings with those shown on a plate in Palladio Londinensis containing similar standard Roman moldings, all likely based on moldings shown in Palladio’s Four Books. (Figure 5) 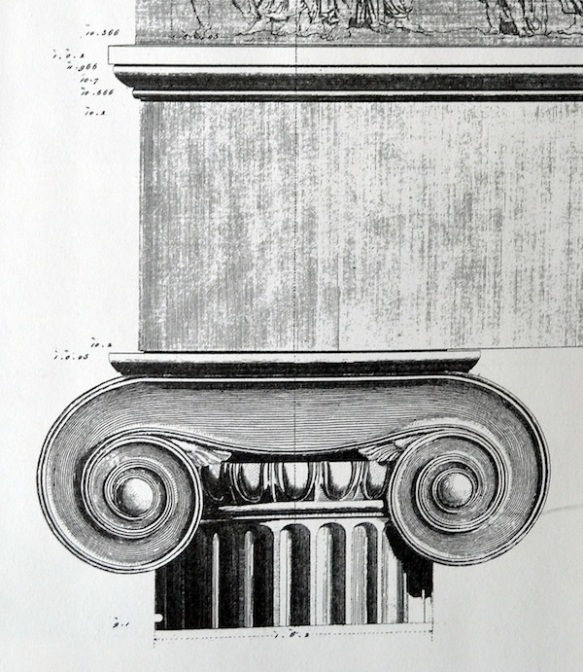 Britons were introduced to the elegance and complexity of Greek moldings with the appearance in 1762 of the first volume of Stuart and Revett’s The Antiquities of Athens. This monumental undertaking, with its numerous engravings of plans, elevations, details, and conjectural restorations, made an indelible impression on the British architectural community and marked the birth of the Greek Revival movement. Pictured in the first volume were several plates pertaining to the Ionic temple on the Ilissus River in Athens.[2]  In a detail of the temple’s capital and entablature, the abacus has the profile of a quirked ovolo instead of the straight-sided slab typical of Roman orders. (Figure 6) A quirked ovolo is an ovolo that takes the form of an ellipse and turns inward towards the top, leaving a small space between it and the member above it. Since the curve of an ellipse is complex, requiring several radii to define it, it can take many different profiles from boldly curved to tightly compressed. Another quirked ovolo is seen supporting the taenia.

Robert Adam was among the first British architects to incorporate Greek moldings and other Grecian details in his designs. In Volume I of The Works in Architecture of Robert and James Adam, Esquires (1778) Adam stated his partiality for Greek moldings.

The mouldings in the remaining structures of antient Rome are considerably less curvelineal than those of antient monuments of Greece. We have always given preference to the latter, and have even thought it adviseable to bend them still more in many cases, particularly in interior furnishings, where objects are near, and ought to be softened to the eye. . . [3]

Adam employed a personalized Greek Ionic order for the exterior of London’s Lansdowne House. The detail of the order shown here is dated 1765 and was published in Adam’s Works in 1778. (Figure 7) While the abacus follows Greek precedent by being an ovolo rather than a straight-edged slab, its profile is a Roman-style ovolo. The moldings separating the frieze from  the architrave, however, incorporate what is definitely a Greek quirked ovolo supporting a fillet. The source for Adam’s Greek details was likely The Antiquities of Athens.  He also derived Greek details from engravings by Giovanni Piranesi, who published prints of Greek Ionic capitals copied from Julien-David Le Roy’s Ruines des plus beaux monuments de la Grèce (1758). Piranesi worked with Adam for a time, executing some of the engravings for Works.

Boston architect Asher Benjamin can be credited with being America’s earliest and most energetic promoter of Greek classicism. In the 1806 first edition of The American Builder’s Companion, Benjamin offered an interestingly curious illustration to demonstrate the visual superiority of a cornice of Greek moldings over Roman moldings. (Figure 8) He elucidates as follows:

A is a Tuscan cornice copied from Langley, [A is the dotted line] and seen at an angle of forty five degrees from the horizon, (Fig. 2) which is the angle cornices are commonly seen at. B is a modern cornice, which is only two thirds of the height. This experiment proves, that a cornice, when seen at the angle of forty five degrees, may be diminished one third of its height, and appear to the spectator to be diminished only two elevenths; and when seen at an angle of fifty degrees, (Fig. 3) which is a little nearer to the building, it may be diminished one third, and appear to be diminished one sixth . . . which will make a saving of at least one fourth of the expense, beside having so much of the height of the wall of the whole building, and at the same time have a lighter and better appearance.[4]

Referring to Fig. 4 on that same plate, Benjamin writes:

A [the solid-line molding] is an ovolo, or quarter round, which is commonly used in the orders. The figure shows the advantage of quirked mouldings. Beside looking better, their size may be increased one third without increasing their height, as seen by B [left dotted line] ; or their height may be diminished one third, without appearing much less, as seen by C.[right dotted line][5] 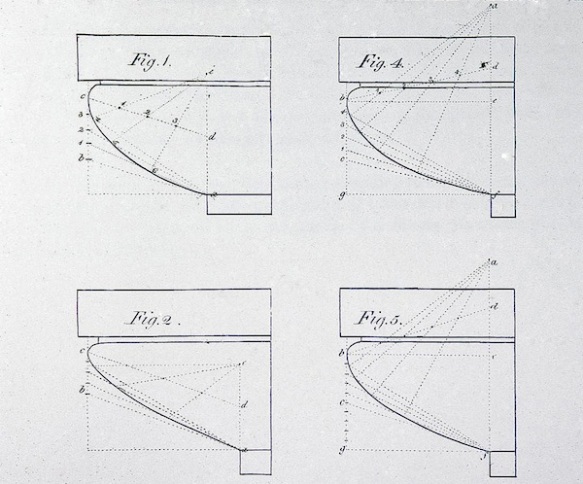 In Plate eleven of the 1827 edition of The American Builder’s Companion, Benjamin illustrated several examples of quirked ovolos. (Figure 9) He noted that the molding can be part of an ellipse or a parabola. Benjamin praised Greek design ingenuity, stating:

In the Roman ovolo there is no turning inward, at the top; therefore, when the sun shines on its surface, it will not be so bright, on its upper edge, as the Grecian ovolo; nor will it cause so beautiful a line of distinction from the other moldings, with which it is combined, when it is in shadow, and when lighted by reflection.[6]

The various radii making up each molding in Benjamin’s plate are seen in the dotted lines and reveal the complex sophistication of Greek moldings.

William Strickland made use of quirked ovolos on the interior of the Tennessee State Capitol (completed 1859), one of the nation’s premiere examples of Greek Revival architecture. The stone piers supporting the vaults in one of the ground-floor committee rooms are topped with sharp, finely cut ovolos. The quirk forms the dark line above the ovolos and lends definition to the composition. (Figure 10)

Figure 11. The Rules of Work of the Carpenters’ Company of the City and County of Philadelphia (1786) Plate XVI.

We can see the change in treatment of panel moldings from the 18th century to the 19th century by comparing a plate in the in the 1786 Philadelphia Carpenters’ Company Rule Book with one in James Newlands’ The Carpenter’s Assistant, (Figures 11 & 12) Though Newlands’ work is British, his illustrations are consistent with American practice starting in the early 19th century. In the Carpenters’ Company illustration, we see how typical Roman-style panel moldings are cut from the rails and stiles and that the fielded panels are sharply beveled on one face or both. Newlands’ moldings employ Greek quirked ovolos. Instead of being part of the rails and stiles, his moldings are separate members applied over the junction of the panels with the rails and stiles. Note too, the panels are not beveled. This change in panel treatment, employing applied moldings, became almost universal throughout the country in the 19th century.

An example of applied panel moldings is seen in a door jamb at the 1846 Virginia School for the Deaf and the Blind, designed by Baltimore architect Robert Cary Long, Jr. Here, however, the panel moldings are a simple flattened Greek cavetto. Note the lack of beveling in the border of the panel field. (Figure 13) 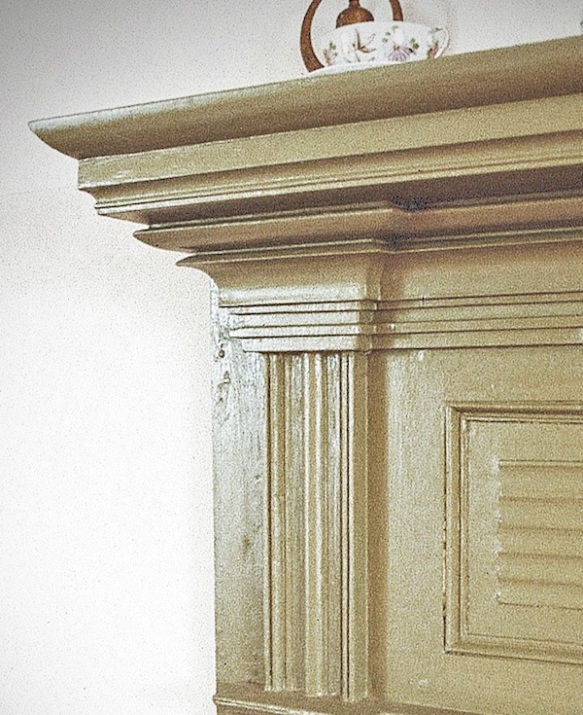 The vigorous beauty of Greek moldings is evident in the mantel shelf of Annandale, an 1840s farmhouse in central Virginia.  The sharp edges of the quirked ovolos in the shelf board and bed moldings are typical of the period. Such profiles required carpenters to acquire special blades for their planes. (Figure 14)

In some rural Greek Revival houses it is not unusual to see an assertive series of sharply projecting quirked ovolos forming a mantel’s bed moldings. A characteristic example of this ambitious treatment is found in Glen Maury, an 1831 plantation house in Buena Vista, Virginia. (Figure 15) Although it’s tempting to assume this is the product of a craftsman’s overzealous imagination, it’s more likely that these moldings were inspired by illustrations of arrises found below the echinus on the typical Greek Doric capital. We see these arrises on a detail of the Doric order published by the New York architect Minard Lafever in The Modern Builder’s Guide (1833), one of many American design books promoting the Grecian style. (Figure 16) In his preface, Lafever acknowledged his source: “Messrs. Stuart and Revett of London; from whose highly valuable and popular work entitled ‘The Antiquities of Athens,’ I have borrowed the article relating to the ancient Orders of Architecture.”[7]

Although Greek moldings continued in use into the third quarter of the 19th century, they soon passed out of fashion in favor of more complex Italianate and Gothic-style moldings. They all but disappeared from use in the early 20th century with the widespread popularity of the Colonial Revival movement, which brought about a resurgence of Roman moldings imitating 18th-century practice. Nevertheless, following Asher Benjamin’s observations, we should not discount the value of Greek moldings for adding a distinctive aesthetic quality to contemporary classical design.

This site uses Akismet to reduce spam. Learn how your comment data is processed.